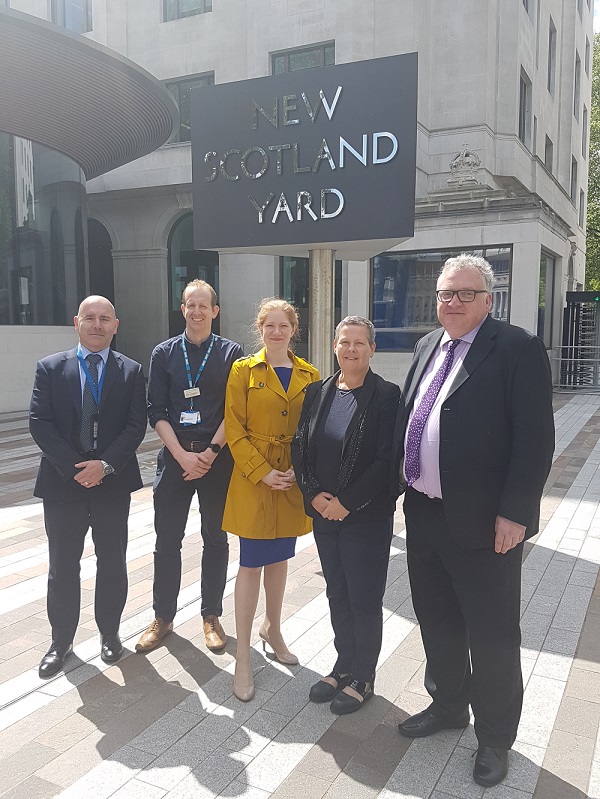 A world-leading multi-agency specialist unit dedicated to tackling stalking has been launched by Barnet, Enfield and Haringey Mental Health NHS Trust (BEH) in partnership with the Metropolitan Police Service (MPS) and the Suzy Lamplugh Trust.

Designed to be a centre of excellence, the Stalking Threat Assessment Centre (STAC) will offer a range of services from different agencies, all working together to combat stalking and protect victims.

The new STAC is supported by the Mayor of London and the project as a whole has been awarded £4 million pounds over two years from the Home Office’s Police Transformation Fund. Around £1.4m of this funding will be dedicated to the STAC in London while the rest will be divided between two other units in Hampshire and Cheshire who are also taking part in this pilot.

The initiative will aim to improve responses to stalking across the criminal justice system and the health sector through rehabilitative intervention for stalkers. Ultimately, it is hoped that working with perpetrators can help to make victims of stalking safer.

Forensic Consultant Psychiatrist Frank Farnham, and Sara Henley Consultant Clinical and Forensic Psychologist lead BEH’s National Stalking Clinic and helped set up STAC. They said, “We are delighted to have developed this partnership with the MPS and the Suzy Lamplugh Trust. Over the last 12 years at the Fixated Threat Assessment Centre (FTAC) we have developed significant expertise in assessing and managing those who stalk public figures. We now have the opportunity to apply this knowledge in managing all stalking cases, thereby reducing the risk posed to victims.”

Andy Graham is BEH’s interim Chief Executive. He said, “A team of expert police officers, alongside our mental health specialists and victim advocates will investigate high risk stalking allegations. Our teams will offer expert advice to local borough officers in relation to stalking allegations, identifying risks, and assisting with management plans to protect the victim and public from the stalker.”

The team will also identify perpetrators who may be suitable to undertake a behaviour change programme. These individuals may also be referred to other community services, where appropriate, such as local mental health, drug & alcohol or other support services. The National Probation Service will work alongside officers to manage the ongoing risk such offenders pose to the community and to their victim.

It will be staffed by eight police officers, two nurses, a nurse manager, Forensic Consultant Psychiatrist Frank Farnham, and Sara Henley Consultant Clinical and Forensic Psychologist, supported by a victim advocate, a Crown Prosecution Service lawyer and a probation officer. The STAC’s two year pilot aims to reduce reoffending and improve public safety; increase early intervention to reduce the risk of offenders becoming violent; improve the response to victims of stalking; and enhance communication and relationships between the police and other local services to help improve how information is shared. At the end of the pilot, the outcomes will be assessed and will be considered for roll out nationally.

The Suzy Lamplugh Trust will provide independent stalking expertise to professionals. Specialist stalking advocates from the National Stalking Helpline, which is run by the charity, will provide crucial advocacy to victims of stalking.

There is no legal definition of stalking, however, it has been described as a pattern of unwanted and persistent behaviour that is motivated by a fixation or obsession that causes a victim to suffer alarm, distress or a fear of violence.

Physical violence is not the only risk for victims – although this can be a very real danger in stalking cases and this risk can escalate over time. Stalking can also cause psychological trauma to victims.

According to the Crime Survey for England and Wales, one in five women and one in ten men will experience stalking in their adult life.

Since changes in the law which recognized stalking as a separate offence came into force at the end of 2012, the MPS has seen significant increases in reporting, as both officers and victims gain a better understanding of the crime.

Over 1,000 reports of stalking were recorded by police in London in 2017 and there were 12,000 reports of harassment. However, officers believe that the introduction of this unit will lead to an increase in the number of stalking offences recorded, as experts can advise local police to spot the early signs.

Cressida Dick, Commissioner of the Metropolitan Police Service said: “When we think of the impact on victims, violence is the most obvious concern that comes to mind, but, psychologically, stalking can also have a devastating impact that can leave victims feeling like they have no options but to alter their entire way of life.

“I have spoken often about my commitment to tackling violence - and of course recently there has been a focused effort on my part and on the part of the Met to explain our current work.

“I am committed to tackling violence in all its forms and there are clear opportunities through the STAC to intervene to stop incidents from escalating to violence.

“Our new approach to responding to stalking is through a fantastic multi-agency partnership that puts victims at the very heart of what we do.”

Detective Inspector Lee Barnard, who will be leading the unit for the MPS said: “Stalking is a crime of persistence and, whether the perpetrator is violent or not, it can have a devastating impact on the victim’s lives.

“By bringing together police, health professionals, charities, and other areas of the criminal justice system, we can identify offenders sooner, offer better support for victims, and ensure that risk to the victim and the public is reduced.

“For some stalkers the best course of action is prison; but others will simply carry on with their behaviour when they are released, so we need different options to help them stop for good.”

Rachel Griffin, Chief Executive of Suzy Lamplugh Trust said: “Stalking is a devastating crime which is characterised by obsession and fixation, and commonly causes prolonged suffering for victims.

“Our aim for this this pilot is to improve the way that key information is shared between agencies, better protecting victims of stalking. We also hope that an intervention with perpetrators of stalking will improve understanding of psychological drivers, and encourage cessation and desistance of stalking behaviours.”

The Deputy Mayor for Policing and Crime, Sophie Linden, said: “This new Stalking Threat Assessment Centre is part of the Mayor’s comprehensive package of measures to intervene and prevent violence against women and girls, tackle dangerous individuals who pose a risk in our communities, and to improve services for victims who have already suffered so much.

“Stalking can have a devastating effect, and victims often suffer extreme psychological trauma. By bringing together expertise and professionals to help combat this devastating crime, we hope to significantly reduce the risk to the public and help keep Londoners safe.”

Clare Waxman, the Independent Victims’ Commissioner for London, appointed by the Mayor of London, said: “Stalking is an insidious crime that can have devastating, long-lasting consequences for victims and their families. We know that stalkers are fixated and obsessive and that this can stem from underlying mental health issues.

“The launch of the new Stalking Threat Assessment Centre here in London is a vital step forward in our ability to change the behaviour of stalkers and the underlying causes, whatever they may be.

“By bringing together a team of experts from a range of agencies, we have a real chance of stopping their behaviour and protecting victims.”