Need help urgently?
You are in:
Home/ News/ Art On The Walls – Successful artists announced

We are excited to announce the successful artists and artist collectives who will be working across our four wards at Blossom Court at St Ann’s Hospital, to facilitate workshops and design a collaborative piece that will be painted on to the walls of the wards.

The successful artists for the wards are:

Find out more about them below.

Isabella Mitchell is a visual artist from North London. She has exhibited at the Mall Galleries and Alexandra Palace as part of Artists Walk 2021. Isabella has hosted and organised drawing-led workshops and events across the UK, including at ALSO Festival in Warwickshire and Life Lessons Festival at the Barbican Centre.

Isabella said: “I applied to the Art on the Wall project as I saw this as a brilliant opportunity to work collaboratively to create a large scale piece of art in a space that would benefit so much from the bright colours and playful shapes signature to my work. I get so much pleasure by seeing the ideas and artworks created during workshops, so this is a fantastic opportunity to work closely with those who spend time at Blossom Court, and together produce a mural that can be enjoyed by many for years to come.” 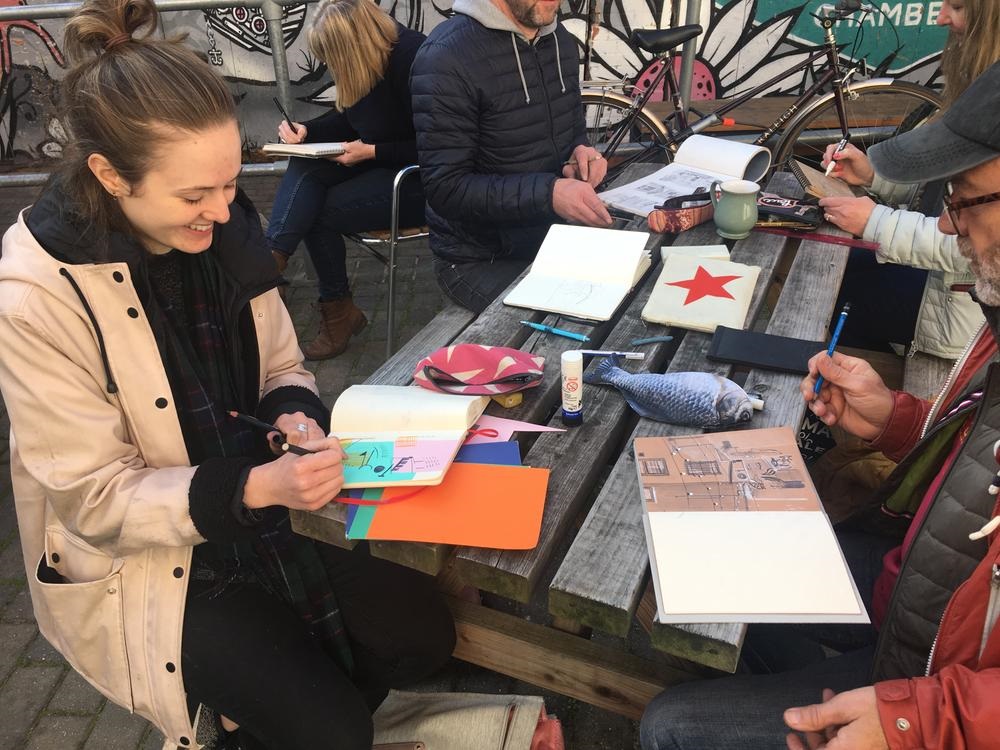 Greg Derham is a mixed media artist combining collage, action painting, assemblage and figurative expressive elements. He studied a BA in Fine Art Painting at the Slade School of Art UCL as well as Architectural Stone Carving at City & Guilds of London Art School. He also works part time in a stained-glass workshop. His practice is focused on music, people in motion, rhythm, energy and dance, capturing the movement of life.

His influences include Toulouse Lautrec, Jackson Pollock, Hoppa and Degas. Tom Waits is also an inspiration – the fly on the wall character, sitting at the end of a bar, writing poetically about the world as it passes by. The Jazzcotech dance scene as well as the Nicolas Brothers are influential too, as well as his father’s work as an architect designing live concert venues.

Greg said: “I would like to work with Tulip Ward especially as this is the ward I have been most recently sectioned and have just left. My journey has coincided with many people on the ward, many of whom I have bonded with and care a lot about. I sometimes find that I’m extra creative while on the ward as I need an outlet more than when I’m on the outside.

“My proposal is to create a mixed media mural on one wall. I will use pre-prepared charcoal portraits of people on the ward, printed photos of the artwork created during the workshops which will be held on the ward, acrylic and spray paints. I also have three existing works which I would like to donate to the ward.

“The scene proposed for the mural is of a barge on an Amsterdam canal surrounded by the vibrant life of the city with tulips in the foreground. To me, Amsterdam represents music and freedom. I also find canals therapeutic and the tulips of Holland obviously reference the ward's name. There are lots of analogies I like about this particular scene. The barge is a ship we are steering. The lock is the hospital we are waiting in to be freed again. We have to wait here a little time but eventually you rise up like the water and can move on.”

Aoife van Linden Tol is an award-winning artist working at the nexus of art, science and technology. Specialising in explosives, she has fused her interests in nature, cosmology, chemistry, physics and psychology. Her multi-disciplinary practice spans sculpture, installation, drawing, photography, illustration, video, sound, performance, augmented reality, science and research. She creates abstract works which often examine concepts of time, density and matter, as well as deep human emotions and motivations.

She regularly collaborates with scientists and academics to create conceptually rigorous and socially engaging artworks and participatory projects.

Graduating from Central St Martins College of Art and Design in 2002 with a BA Hons in Art & Design, Aoife exhibits internationally including at the ICA, the San Francisco MOMA, USA, NGBK Berlin and Ars Electronica Festival. Her work was recently exhibited alongside old masters William Blake and J.M.W. Turner, as well as contemporary heavyweights such as Douglas Gordon, Susan Hiller and Cornelia Parker in FIRE: Flashes to Ashes in British Art 1692-2019 at the RWA, Bristol. 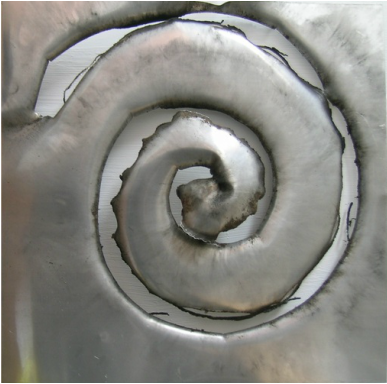 Matt Dosa is a self-taught painter and muralist, working out of a studio in Tottenham, north London. His art career started in graffiti, but in recent years his practice has been focused on abstract painting. Since making this transition, Matt’s signature geometric style has found home in outdoor projects and murals, as well as on canvas and the walls of art galleries.

Matt said: “There was a lot of great work made in the workshops we ran at St.Ann’s, as part of the Mind murals project, but Greg and his work really stood out. In the space of two hours he created an amazing and huge (2m long!) painting, with collaged elements and incredible detail. It was clear that he is a serious artist, and when he mentioned that he wanted to go for the Art On The Walls job, Aoife suggested we team up with him.

“He demonstrated great confidence in showing his work in our presentation, and I was so impressed by one of his paintings that I purchased it from him straight afterwards. I think it’s brilliant that he got the job, and I’m very much looking forward to working with him!” 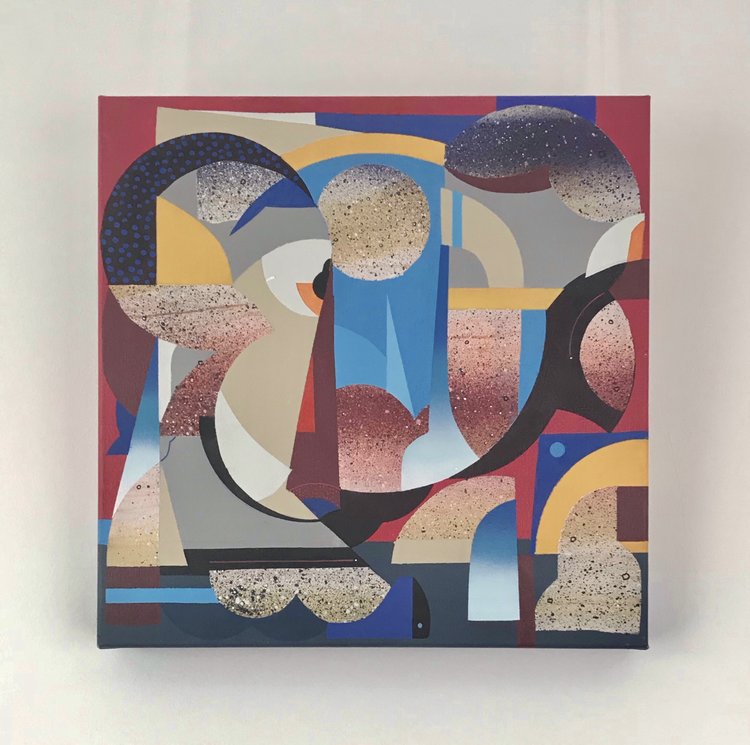 R.A.D Mural collective are committed to collaborating with organisations that are benefiting people socially and holistically.

They said: “We are united in making public artwork that strives to include voices that have been historically overlooked and marginalised. We celebrate neurodiversity and as artists we all have our own individual communication styles and mental health needs.

“We are a newly founded artists collective, but we have been collaborating together on community projects for over 10 years and each of us have our own creative practices.”

Charlotte Harrison’s work is inspired by her love of colour and pattern, she makes collages which translate into larger pieces with recurring motifs and a feel of flow and balance.

Charlotte studied Fashion and Textiles at the University of the Arts, London. Since then, she has worked as a print designer in the fashion industry as well as teaching. After further training she worked therapeutically in the arts for charities supporting young people, women and children.

Charlotte has recently launched Hot House Collection, selling her artwork and applying her collage and patterns to different products. Charlotte lives and works in London.

Charlotte said: “I applied for the project because I’m passionate about the transformative and therapeutic effect the arts can have. I really believe that our surroundings can have a big impact on how we think and feel. I’m looking forward to collaborating with the service users and staff at St Ann’s to create something really special.” 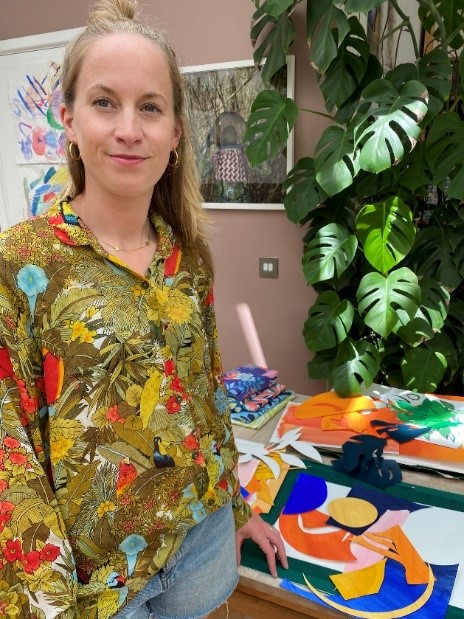