Need help urgently?
You are in:
Home/ News/ In an interview with the Health Service Journal, our joint CEO explains how she felt she needed to prove herself when vying for top-level roles while others landed jobs based on their potential alone.

In an interview with the Health Service Journal, our joint CEO explains how she felt she needed to prove herself when vying for top-level roles while others landed jobs based on their potential alone. 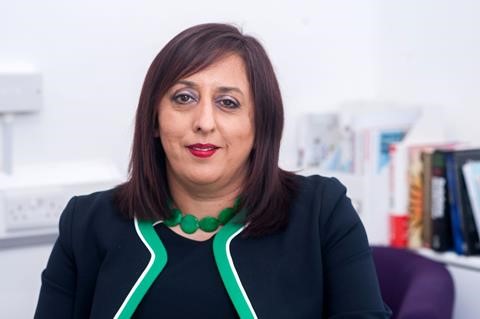 Jinjer Kandola, Barnet, Enfield and Haringey Mental Health Trust chief executive, is spearheading a major recruitment drive – called Someone Like Me – to hire 400 people from within the deprived communities the organisation serves, to roles including doctors, nurses, therapists and other healthcare professionals.

Speaking to HSJ, Ms Kandola – also CEO of Camden and Islington FT – revealed her own journey to the top had a “lot of knocks along the way” and was longer and harder than expected.

The London-based leader’s parents are from Punjab and came to the UK in the 1950s and 1960s.

She has worked in the NHS for more than 35 years, taking on her first leadership roles at Hertfordshire Partnership FT before becoming CEO at BEH. Last summer, she became joint CEO of the trust and neighbouring CANDI.

“I was born in the UK but I didn’t speak a word of English until I was five years old,” she told HSJ.

“I never thought I could be an NHS chief executive… it took a lot longer and it was harder to do – you get a lot of knocks along the way.

“And as a working woman, I feel that irrespective of ethnicity. It’s a double whammy when you don’t look like everybody else.

She added: “I think I’ve got jobs because I can prove that I could do it, while other people sometimes get jobs because people see potential in them.

“That is a big difference. The Someone Like Me campaign is trying to find potential.”

‘Diversity needed at every level’

Ms Kandola believes that, through past work to promote inclusion, the trusts have “come a long way” but she added she “doesn’t think we’ve cracked it yet”.

Of BEH, she said: “We need to see much better diversity at every level – board level, and tiers beneath.

“We have a much more diverse organisation, and more representative, but I don’t believe you can ever rest on your laurels and think we’ve cracked it.”

Overall, 52 per cent of BEH’s workforce identifies as being from ethnic minority backgrounds, compared with 40 per cent identifying as white and 5 per cent with unknown ethnicity.

However, the joint CEO is keen the trusts retain their individual identities and provide services specific to their communities.

“Some degree of variation is right – we’re not wanting to standardise everything,” she added.

“You need to be mindful and respectful of that. Otherwise, what you’re doing is exacerbating inequality.”

One example of attempting to improving outcomes, Ms Kandola explained, is identifying ways of improving patient experience and learning from other mental health partnerships.

She said work on the review is ongoing, with some of the initial work looking at the South London partnership (of Oxleas FT, South London and Maudsley FT, and South West London and St George’s Mental Health Trust), and work the three organisations have carried out to reduce inappropriate out of area placements.

BEH and CANDI, both rated “good” by the Care Quality Commission, are also working with Mersey Care FT to improve culture.

The Someone Like Me campaign launched across BEH earlier this month. Trust leaders said they also want to offer roles to people without traditional, professional qualifications, but with lived experience of mental illness, while also offering placements to students from Middlesex University.

Additional funding has been awarded for recruitment to help meet rising demand for the trust’s services, they added.

'Reproduced with the permission of the HSJ'